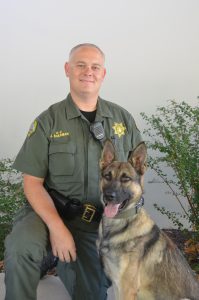 K9 “Dickie” is a five year old dual purpose Belgian Malinois who was imported to the United States from the country of Hungary.  Deputy Sherman and K9 “Dickie” attended a 200 hour P.O.S.T.  approved Canine Patrol School. K9 “Dickie” was taught how to search for, locate, and alert to hidden subjects, apprehend resisting and fleeing subjects, and search for discarded articles.   They also attended a 200 hour P.O.S.T. approved Narcotics Detection Course, where K9 “Dickie” was taught to alert to the odor of four different illegal substances (marijuana, cocaine, heroin, and methamphetamine).

Deputy Sherman and K9 “Dickie” enjoy being a part of the City of Sonoma Police Department, as well as serving and protecting the citizens of Sonoma.