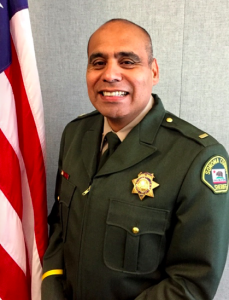 Sonoma City Manager Cathy Capriola is pleased to announce that Sonoma County Sheriff’s Lieutenant Orlando Rodriguez will be the new Police Chief for the Sonoma Police Department. He will start on July 17, 2018, immediately following the retirement of current Chief Bret Sackett. Details regarding his swearing-in ceremony will be released at a later time.

Lt. Rodriguez comes to Sonoma with an understanding of small town policing combined with large agency experience plus direct service in Sonoma. He started his career as a Police Officer with the City of Petaluma in 1995. He joined the Sheriff’s Office team in 1999 and earned promotions to Sergeant in 2014 and Lieutenant in March 2018. His skills include patrol, traffic enforcement, domestic violence investigation, crisis negotiations, and community-oriented policing. As a detective, he gained expertise in drug and crime scene investigations. Upon his promotion to Sergeant, he returned to the Sonoma Police Department where he was responsible for patrol operations before he was assigned to the Sheriff’s Personnel Bureau. There, he gained experience in staff administration and hiring new employees.

The Sheriff’s Office has been providing contract law enforcement services to City of Sonoma since 2004.
Lt. Rodriguez was one of the first deputies to work in Sonoma when the Sheriff’s Office began serving the Sonoma community through the law enforcement contract. He speaks fondly and passionately of his nearly five years in Sonoma, first as an officer and later as a Sergeant in Sonoma and the Valley. The Sonoma officers in those early years had outstanding ideas for how to build a Police Department that best serves the Sonoma community. Those ideas helped shape the Sonoma Police Department into the well-respected department it is today.

Sonoma City Manager Cathy Capriola says, “We are excited about Lt. Rodriguez’s commitment to the community-policing model, his passion for the Sonoma community, and his authentic servant-leadership style. I look forward to working with him to continue the rich tradition of exemplary, high-caliber, and cost -effective law enforcement services for the City of Sonoma.”

Lt. Rodriguez states his greatest asset is his community-oriented policing philosophy. He intends to keep working with the Sonoma and Valley communities to maintain and strengthen relationships. He will lead the Sonoma area officers and deputies by example focusing on teamwork. Lt. Rodriguez’s bilingual skills are an additional asset for the community – both the City and the Valley.

Chief Sackett and Lt. Rodriguez are working closely with City officials to ensure a smooth transition of leadership. If you see him around town, feel free to introduce yourself and say hello.