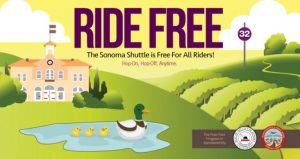 The Sonoma County Board of Supervisors and the City of Sonoma have approved funding to subsidize fares for all riders on Route 32, the “Sonoma Shuttle,” through June 30, 2020. The City is contributing 30%  of the funding and the County is contributing the remaining 70% for the program. When riding the local route serving the communities of Agua Caliente, Boyes Hot Springs, Temelec and the city of Sonoma, passengers will no longer need to worry about having the correct change, having a transit pass or paying a fare at all!   The “Fare-Free” program is designed to make using local transit services easier and to encourage hop-on, hop-off, travel without the need to pay a fare.

Sonoma County Transit introduced its “Fare-Free” program in June on Route 24, the “Sebastopol Shuttle,” and was quickly followed by Route 66, the “Windsor Shuttle.” and Route 67, the “Healdsburg Shuttle.”  In addition to approval on Route 32, the Board of Supervisors have also approved funding to subsidize a  “Fare-Free” program on Route 28, the “River Shuttle.” The River Shuttle serves the River Area communities of Guerneville, Monte Rio and Occidental.