FEMA defines hazard mitigation as any sustained action taken to reduce or eliminate long-term risk to life, property, and the environment from natural disasters. Both FEMA and the Governor's Office of Emergency Services (CalOES) must review and approve Local Hazard Mitigation Plans and (CalOES) is responsible for soliciting and assisting in the preparation, review, and submittal of applications for Hazard Mitigation Assistance Program grants from local governments in California.

In June of 2020, the City Council learned that Sonoma County had been awarded a FEMA grant to produce a Multi-Jurisdictional Hazard Mitigation Plan to update the County's Hazard Mitigation Plan along with other participating cities within the county. The City Council subsequently authorized the City of Sonoma's participation in the joint planning effort.

The multi-jurisdictional planning process helped to eliminate duplication of efforts by local agencies by providing a comprehensive approach to risk reduction countywide. In July of 2021, a public workshop was held via zoom on the entire draft plan to gather public comments. Informational public breakout sessions were held for the County and each of the four participating municipalities. No public comments were received from participants related to the City of Sonoma Annex (Section 4 of Volume 2 of the Sonoma County Multi-Jurisdictional Hazard Mitigation Plan Update 2021). 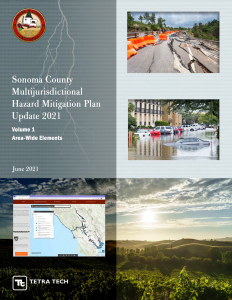 The proposed plan is split into two parts,

The plan has been reviewed by both CalOES and FEMA and has received Approved Pending Adoption (APA) status from those agencies. Each participating jurisdiction within the County must adopt by resolution the plan as written. The plan will be considered final once FEMA receives and acknowledges that the plan has been adopted by all participating agencies.

Changes to the plan can only be made after the plan has been approved by CalOES and FEMA and adopted by the participating local jurisdictions. This process of making changes only after adoption of the plan was necessitated by the need to meet a summer 2021 APA deadline for federal grant eligibility and because of the significant coordination challenges resulting from the number of participating agencies involved. Once the local adoption process has been completed and the final FEMA approval of the plan obtained, local jurisdictions can then consider making amendments to the plan.

Sonoma City Council will consider adopting the plan at a regular meeting in November 2021.