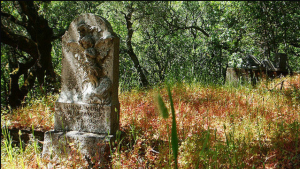 Mountain Cemetery was originally allocated 60 acres of land at the base of Schocken Hill, overlooking the northern edge of Sonoma. The cemetery winds up the side of the mountain and is home to many historical figures such as:

Photos and Brochures by Fred Allebach, Graphics, Scott Summers. This project is supported by The Sonoma Overlook Trail Stewards.