The City of Sonoma received 10 proposals to operate a commercial cannabis business permit by the February 21st, 2020, deadline date.

Summary and Status of RFP and Review Process

One of the original ten proposers (Harvest of Sonoma) withdrew from the process, leaving nine proposals to be considered for selection for one retail storefront operation and one non-storefront retail operation. The City’s Proposal Review Committee (PRC) interviewed the nine remaining proposers who submitted applications to operate a commercial cannabis business in the City of Sonoma on April 28th and April 29th, 2020.

Per the City Council’s approved process and policy, the top five proposers were presented as “Finalists” by the City Manager (to the City Council) at their meeting on May 27th as proposers who are to continue to Step 3 of Phase 1 of the selection process.

On June 1, 2020, the City Council selected two of its five “Finalist” proposers that it wished to progress to the next part of the evaluation process to operate a store-front retail commercial cannabis business in the City. Those two remaining proposers are Matanzas, dba “Justice Grown” and SOSPARC, dba as “SPARC”.

Pursuant to the City’s adopted application procedures and guidelines, each proposer had 45 days from June 1st to provide the City with a selected site it would like to operate its retail store-front business and also during that time period receive from the City a Zoning Verification Letter (ZVL). Both Justice Grown and SPARC provided the City with their chosen sites and received their respective ZVL within the 45-day “site selection” period.

The ZVL’s, issued by Planning Department staff on July 23rd, 2020, verified that each of the two chosen sites were in Commercial zoning districts that would allow a retail storefront commercial cannabis business to operate with a Use Permit and also verified that each site was not located inside one of the City’s four sensitive buffer areas per Title 19 of the Sonoma Municipal Code.

As the selected finalist, SPARC is entitled to apply to the City Manager for a Commercial Cannabis Business Permit which requires, among other things, that the finalist first applies for and obtain all applicable land use entitlements, including a use permit (see process chart).

This application process is adopted pursuant to the Sonoma Administrative Regulations Implementing  Ordinance No. 03-2010 (Section 5.36 of the Sonoma Municipal Code) and Ordinance No. 04-2019 (Title 19).  Please review these regulations to understand the requirements and process for applying for and operating a commercial cannabis retail business in Sonoma.

Applicants and other interested parties should monitor the City’s Cannabis Regulation web page and this page for any additional information, FAQs or updates.  It is the responsibility of the Applicant to stay informed of this information.

If you have any questions or would like an update on the status of your application, please call the Planning Department at 707.938.3681 or by email at cityhall@sonomacity.org.

Sign up to receive updates on Commercial Cannabis via email below. 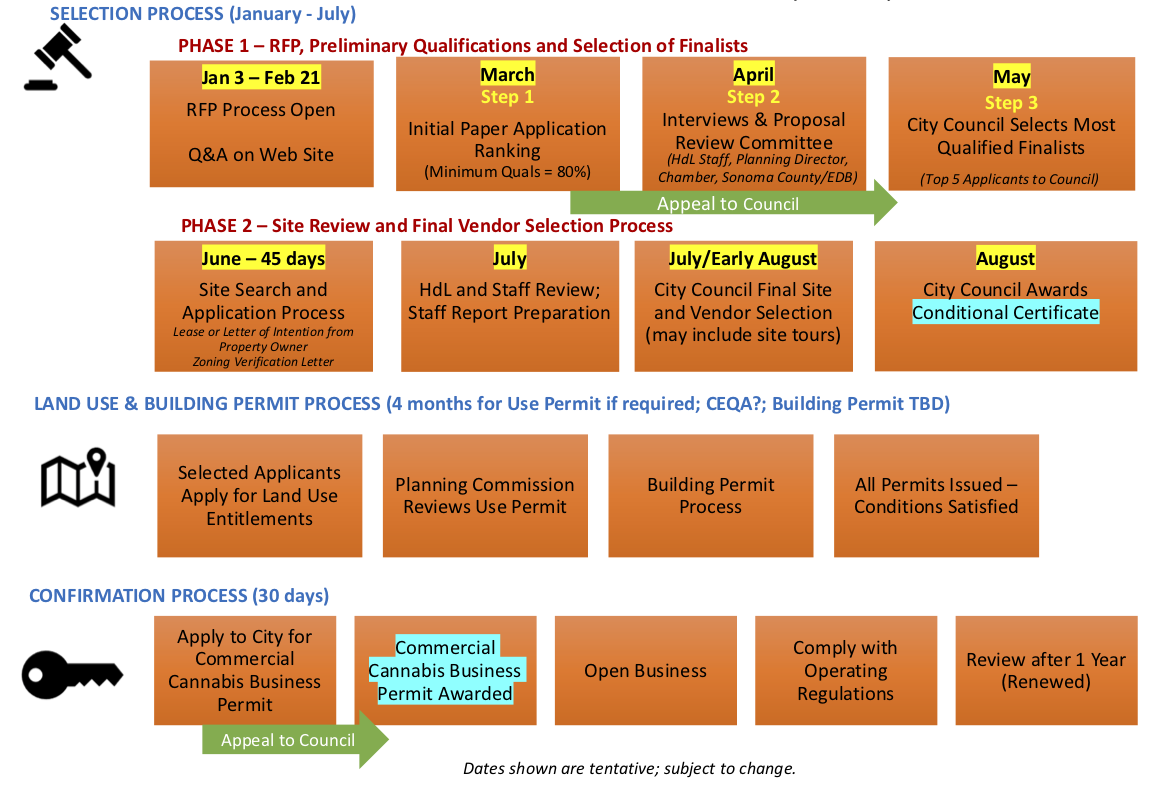 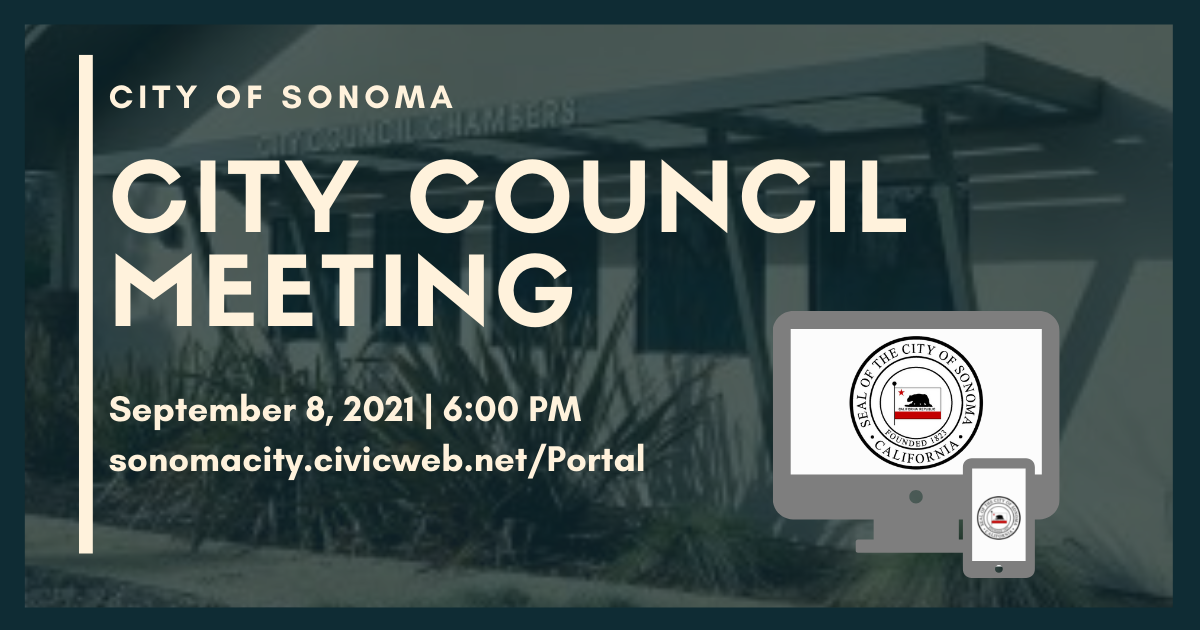 A regular meeting of the Sonoma City Council will be held on Wednesday, September 8th at 6:00 pm. View the full agenda to view items on public hearing and the consent calendar on our CivicWeb Portal. The items to be considered on the regular calendar are:  Draft New/Revised “Application Procedures And Guidelines” to Allow a Second... 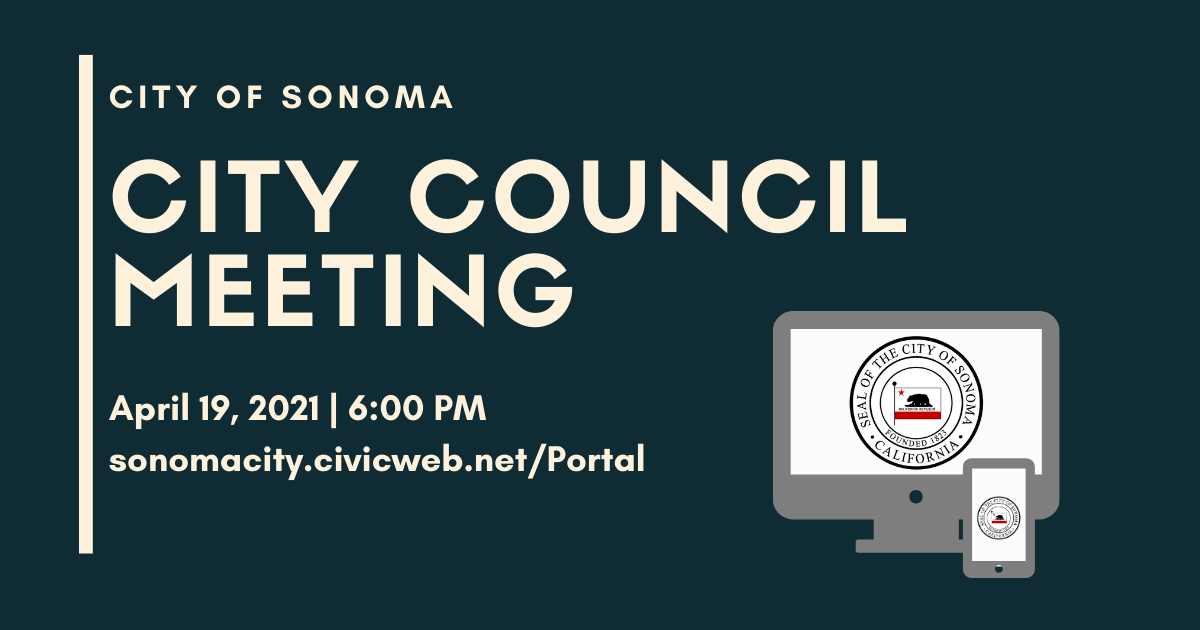 A regular meeting of the Sonoma City Council will be held on Monday, April 19th at 6:00 pm. View the full agenda to view items on the consent calendar including an ordinance to allow a second storefront commercial cannabis business and an ordinance to prohibit the use and sale of products containing polystyrene foam on... 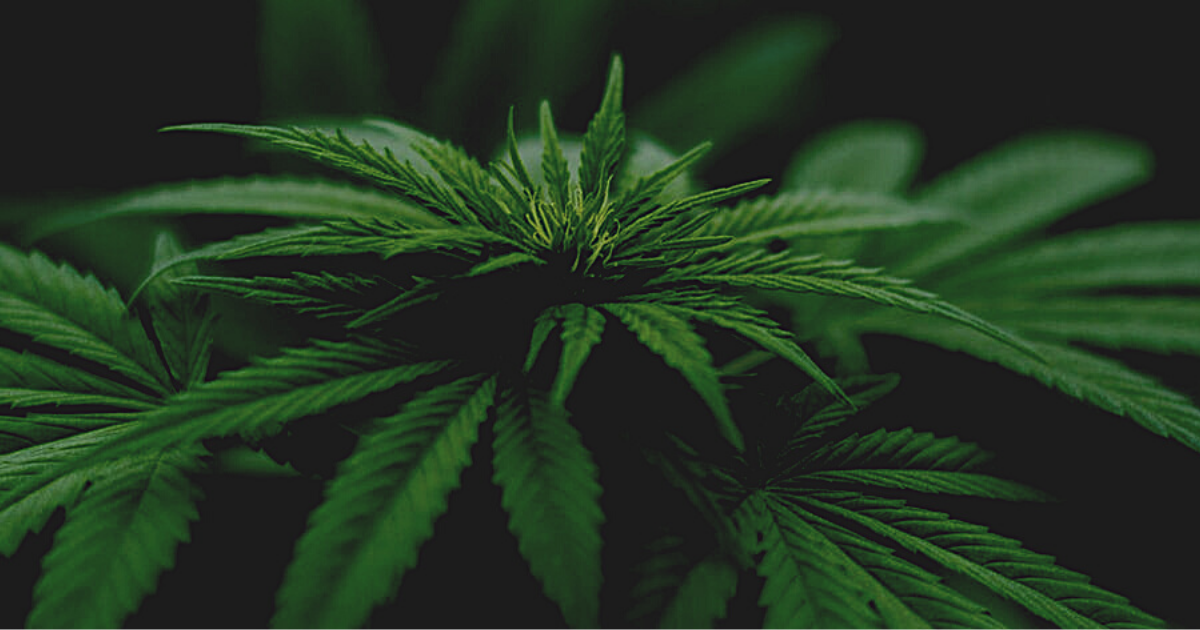 The ordinance to allow a second retail storefront cannabis business in the City was introduced at the April 5th City Council Meeting. It will be brought back to the City Council for adoption at their next meeting on April 19th, 2021.  The effective date of the ordinance would be 30 days after adoption. In the...