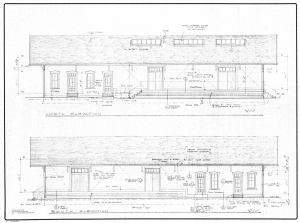 The City of Sonoma is currently accepting proposals for design of a new all-electric Heating, Ventilation, and Air Conditioning  (HVAC) System for the Depot Park Museum Building. The deadline to submit is Monday, August 9th. The Request for Proposals and the  original plans for the building are available in the "Project Documents" section below.

The Depot Museum building was constructed in 1978 as a replica of a train depot building that existed on the site previously. The building's existing HVAC system is aging and the natural gas-powered furnaces have been inoperable since last summer when the underground natural gas service line was severed during removal of a nearby tree stump. To reduce greenhouse gas emissions associated with continued operation of the existing natural gas-fueled furnaces and avoid a costly natural gas service relocation, the City will be updating the entire system to be all-electric. The City’s goals for the HVAC replacement project also include minimization of new penetrations in the existing  building walls to the extent practicable, as well as preservation of existing usable floor space within the interior of the building to the extent practicable.