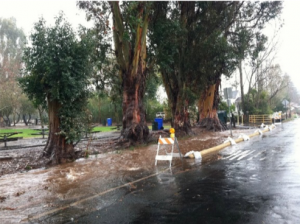 Project Description:  First Street West near Depot Park regularly floods during even relatively minor storms.  This flooding occurs because the drainage channel along the east side of First Street West near Depot Park is too small to convey stormwater runoff from the large watershed above it, which includes much of the Mountain Cemetery and large portions of Norrbom Road.

During winter storms in 2019, a corrugated metal pipe at the downstream end of this drainage channel collapsed, resulting in a sinkhole in a paved crossing over the drainage channel. Temporary repairs helped keep the drainage flowing through the channel for rest of the rainy season, but the crossing has been indefinitely closed and is no longer needed following changes in solid-waste collection operations at the park.

The project widened the problematic drainage channel to alleviate flooding and permanently repaired the area where the corrugated metal pipe collapsed at the downstream end of the channel. The project began with demolition and disposal of existing concrete, asphalt, and Eucalyptus roots that were restricting the channel’s capacity. The drainage channel was then  re-graded and rock slope protection, a boulder weir, a new cast-in-place concrete retaining wall, seed mix, and biodegradable coir mat were installed to protect the new channel against erosion. On the Depot Park side of the channel, a new concrete pathway and a pedestrian guardrail along the new retaining wall were installed to ensure safe access for pedestrians to the park’s picnic areas.

Project Status: On-site construction work began on September 14, 2020 and concluded on January 8, 2021. The revegetation work to be completed by the City of Sonoma, the County of Sonoma, and the Sonoma Ecology Center began on January 11, 2021 and is anticipated to conclude on January 22, 2021.